Sustainability of Atlantic Cod and Haddock

As the UK’s leading importer of Wild Frozen at Sea Cod and Haddock from the North Atlantic, Smales recognizes that responsible and sustainable fisheries are of paramount importance for the future of the resource. 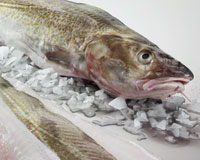 Due to the responsible management of fisheries in these waters coupled with favourable environmental conditions, scientists in Russia, Norway and Iceland are reporting that Cod stocks in the Arctic waters of the North Atlantic are currently bigger than they have been for decades. The spawning biomass in Russia and Norway has not been bigger since the Second World War. At the same time the Haddock stock in Norwegian and Russian waters has more than tripled in size over the past decade.

As a result of the successful fisheries management in the North Atlantic, scientists have now recommended that harvesters are allowed to catch more than 1 million metric tonnes of Atlantic Cod for the first time this century.

According to Marine Conservation Society (MCS) advisory list, Barents Sea Cod, which makes up the largest part of the overall supply, is placed in the Green category. This means that from a sustainability point of view, it is safe for customers to buy and eat Atlantic Cod from this harvesting area.

Atlantic Cod remains the biggest source for the UK’s famous dish, Fish and Chips. Consumers can rest assured that Atlantic Cod will continue to be supplied from responsibly and sustainably managed fisheries for years to come.

The Ramoen vessel is a long-standing supplier to Smales, producing prime fillets from the North Atlantic, Barents Sea and Norwegian Sea that are processed and frozen within 6 hours of being caught to seal-in their freshness.

Bringing a taste of the Ocean to the Brecon Beacons